When Rev Colvile enlarged the chancel of the church during the alterations of 1843, he wrote “The east window of three lights is filled with memorial painted glass, executed by William Holland of Warwick. The centre compartment represents our Blessed Lord in His Kingly Character, and on either side the two Apostles, Peter and Paul. The tracery is filled with a Barcelona Cross and angels bearing shields, with the emblem of our Lords Crucifixion. This window was erected by the trustees of the Bedworth Charity.” The Bedworth Charity was commemorating Rector of Bedworth, Nicholas Chamberlaine. The only image we have of the window is in an artist’s sketch of the 1843 chancel.

During the alterations of 1890, the 1843 chancel was dismantled and re-erected as the present vestry, along with the Chamberlaine window, where if remained for 50 years.

On the night of 15/16 November 1940 stray bombs fell on Leek Wootton. Local resident, Doreen Wright, wrote, “Our own bombs came last night at 2am. … 1st was in Stone House garden – all windows and front door porch smashed and all north and some other windows in Church – Also vicarage roof and stable. Unluckily there’s only a thin skin of soil up there so everything went up instead of being partially absorbed …” (Doreen’s Diary: She Could Not Have Loved More – The wartime diary of Doreen Wright, Published by Leek Wootton History Group, 2012, ISBN: 978-0-9541149-3-0)

It is not known whether some of the tracery lights survived the bomb damage, but the cross in the top centre may match the one in the sketch (see above).

Two windows set into the south wall of the chancel are dedicated to Elizabeth (depicting The Virgin Annunciate) and Ellen Burbury (depicting Faith) as follows:

According to the dates given in the dedications, these windows were possibly originally installed in the chancel that was built in 1843 and relocated to the new chancel in 1890, which would explain why the right hand side of the Ellen Burbury window is partially unreadable.

In 1864 a circular window, inserted with painted glass, was installed over the old vestry door (where the present font is sited). This window was given by Henry Christopher Wise of Woodcote’s children, George, Harriett Mary and Augustus in memory of their brothers, William and Frederick, who had died at 27 (of a “disease of the heart”) and 22 (of a “disease of the hip joints and exhaustion”) respectively.

His eldest son, Henry Christopher, died in 1854 in Ballarat and is remembered in another memorial on the south wall, as is their mother Harriet Mary.

Most of the stained glass windows of the nave were destroyed in 1940 when a stray bomb fell nearby, but a tracery light remains in the west-most window of the south wall, which is best viewed from the gallery at the rear of the church.

According to the history of the church, various coats of arms were inserted in the extreme south and north aisle windows in 1847, funded by the respective owners. The coats of arms were those of Leigh, Duchess Dudley (paid for by Lord Leigh), Ricardo, Wise, Warwick and Clarendon.

It is believed that this single remaining window is the arms of Lady Alice, Duchess Dudley, although, if this is the case, it has been installed back to front because the arms of the husband should be on the dexter (left side to the viewer) and the wife’s on the sinister (right). Lady Alice, being born a Leigh, her arms would have been the white cross engrailed and lozenge in the upper left quarter on a red ground, and her husband, Dudley’s being the green lion rampant.

The east-most window in the south wall of the chancel is a single light featuring The Angel of Bethesda (designed by Henry Holiday and made by James Powell & Sons (Whitefriars) Ltd at a cost of £15 10s 6d).

Research has established that the window was commissioned by Mrs Sarah Hughes-D’Aeth, who also commissioned the East Window, in memory of her nephew, Wilfred Henry Atkinson who was lost at sea, aged 36, on 10 June 1890. 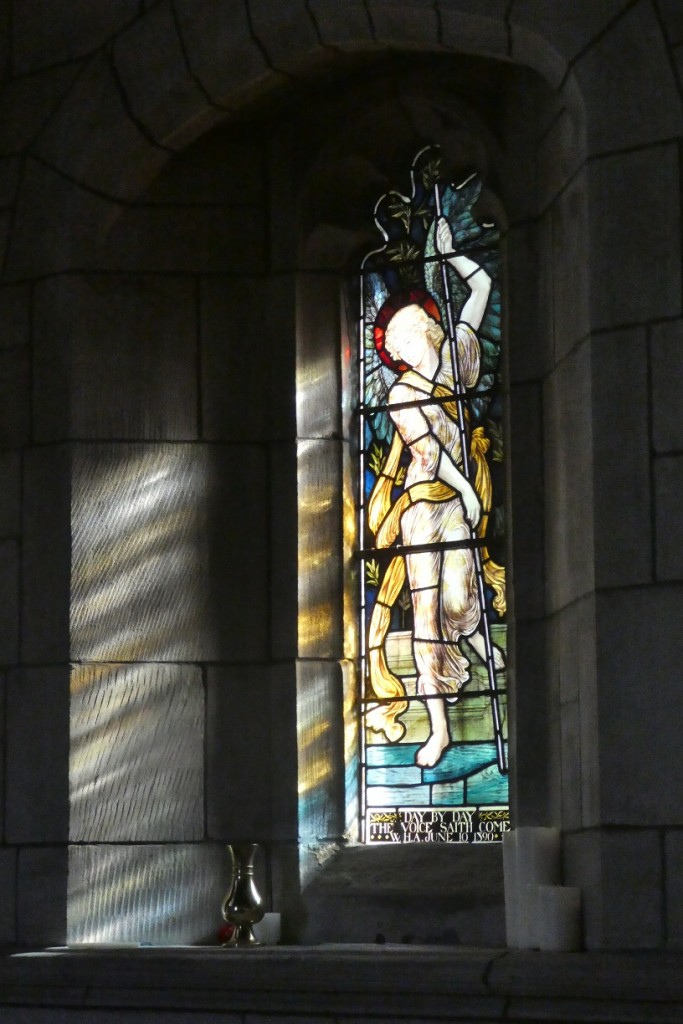 The Angel of Bethesda refers to a story from The Gospel According to St John (John 5:1-9):

The Healing at the Pool

5 Some time later, Jesus went up to Jerusalem for one of the Jewish festivals. 2 Now there is in Jerusalem near the Sheep Gate a pool, which in Aramaic is called Bethesda and which is surrounded by five covered colonnades. 3 Here a great number of disabled people used to lie—the blind, the lame, the paralysed – and they waited for the moving of the waters. 4 From time to time an angel of the Lord would come down and stir up the waters. The first one into the pool after each such disturbance would be cured of whatever disease he had. 5 One who was there had been an invalid for thirty-eight years. 6 When Jesus saw him lying there and learned that he had been in this condition for a long time, he asked him, “Do you want to get well?”

7 “Sir,” the invalid replied, “I have no one to help me into the pool when the water is stirred. While I am trying to get in, someone else goes down ahead of me.”

8 Then Jesus said to him, “Get up! Pick up your mat and walk.” 9 At once the man was cured; he picked up his mat and walked.

The day on which this took place was a Sabbath,”

The quotation appears to come from the Book of Common Prayer:

Christ will gather in His own
To the place where he is gone,
Where their heart and treasure lie,
Where our life is hid on high.

Day by day the voice saith, “Come,
Enter thine eternal home;”
Asking not if we can spare
This dear soul it summons there.

Had He ask’d us, well we know
We should cry. “O spare this blow!”
Yes, with streaming tears should pray,
“LORD, we love him, let him stay.”

But the LORD doth nought amiss,
And, since He hath order’d this,
We have nought to do but still
Rest in silence on His Will.

Many a heart no longer here,
Ah! was all too inly dear;
Yet, O Love, ’tis Thou dost call,
Thou wilt be our All in all.

400, Burial of the Dead
The Book of Common Prayer

The east window was made by Messrs Powell (Whitefriars) and given in 1890 by Mrs Sarah Hughes D’Aeth, who lived at The Lodge, Hill Wootton Road.

Four of the tracery lights depict symbols of the Passion cycle (gold on a red background): pincers crossed with a mallet; three nails; a sponge on a spear, crossed with a ladder; and a robe bearing three dice. These are all items related to the story of the crucifixion.

The main lights depict The Lamb of God, the bottom row depicts scenes from Our Lord’s life: The Nativity; the Way of the Cross; the Crucifixion and; the Ascension, while the top row shows Isaac (carrying a bundle of sticks), Isaiah (carrying a book and quill pen), St John the Baptist (holding a staff) and St John the Evangelist (depicted with a white eagle).