A church has stood on or near the present site certainly since the year 1122 and probably longer, possibly preceded by a pagan temple. Little is known of the old Saxon/Norman church as it was pulled down in 1790 and all that now remains are some parts of the tower, a 12th Century tapered circular font, some mediaeval tiles and a 14th Century bell. It is known that the church had a short low nave, a high chancel with a clerestory and aisles, a central tower and a small transept. The pulpit had a canopy. The pews were open except for two large square ones in the chancel belonging to Mr Greatheed of Guy’s Cliffe and Mr Winter of The Grange, or Wootton Grange. It is possible that at least the lower stones of the tower were not destroyed, but remain in the present tower.

The Faculty dated 23 March 1790 states, “The Church together with the chancel and tower thereof is a very ancient building and is by the length of time become so very ruinous and dilapidated that it is absolutely necessary the whole structure should be taken down and rebuilt.”

The history of our church buildings
back to: Our History | forward to: The present church (built 1790)

This was built on the same site as the earlier church, funded largely, though not entirely, at the expense of The Honourable Mary Leigh, who inherited the Stoneleigh Abbey estate from her brother, Edward Leigh, in 1786. She contributed £500. Other contributions are recorded from local dignitaries and parishioners including:

The church, designed by Hiorne of Birmingham, when first built consisted of the tower with a height of forty-eight feet, which was separate from the nave accessed by the west door (now blocked up). The nave measured forty-one feet by twenty-seven feet and was eighteen feet high. The span of the chancel arch was ten feet and the height fifteen feet. The contractor for the stone work was Brown of Kenilworth who was assisted by his son, a mason.

Since the building was completed scarcely a decade has passed without some sort of extension or improvement being made, but this layout remained largely unaltered for 100 years, with the exception of the chancel being enlarged and a small vestry added in 1843. Fund raising committees and individual benefactors have knocked things down, re-built it and embellished it almost constantly over the years.

The history of our church buildings
back to: The ancient church (demolished 1790) | forward to: The new chancel (1843)

The history of our church buildings
back to: The present church (built 1790) | forward to: The alterations of 1890

1889-1890 was a time for further major alterations. The architect responsible was W D Caroe (1857-1938) who undertook a great deal of church work in his role as Architect to the Ecclesiastical Commissioners. The alterations were:

In 1890 the east window was installed, a gift of Mrs Hughes D’Aeth.

In 1894 the choir stalls, designed by W D Caroe, were erected in red deal, a gift of Lady Waller, in memory of her husband, Sir George Waller, Baronet, of Woodcote.

The history of the church buildings
back to: The new chancel (1843) | forward to: The millennium alterations (2000)

The history of our church buildings
back to: The alterations of 1890 | forward to: The reordering, 2002

In 2002, during the incumbency of Canon Brian Pearson, a further reordering within the church took place, with a new dais and nave communion table, as well as the modernisation of the vestry. 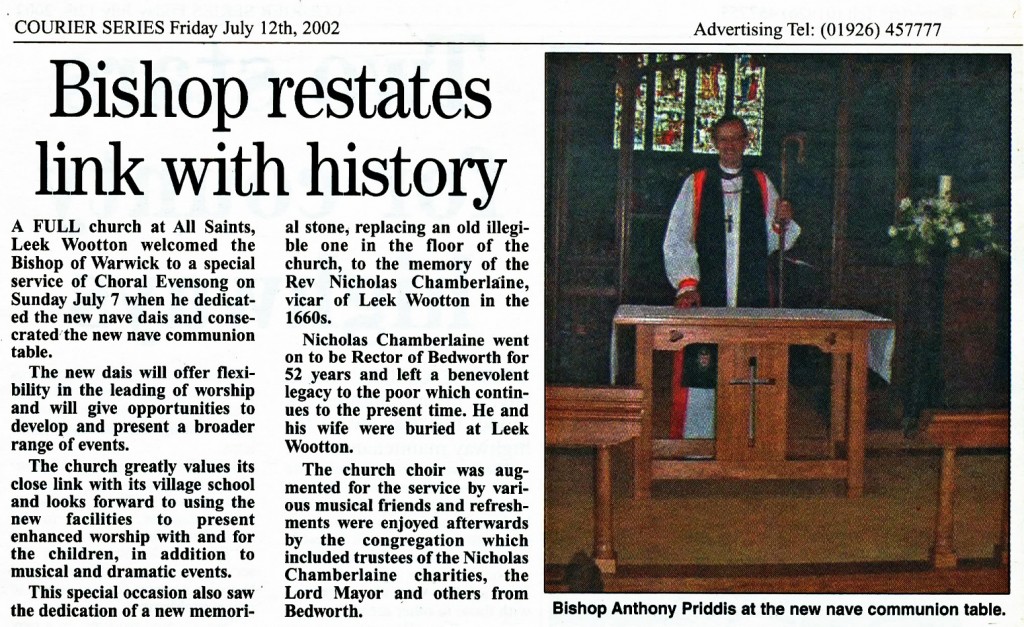