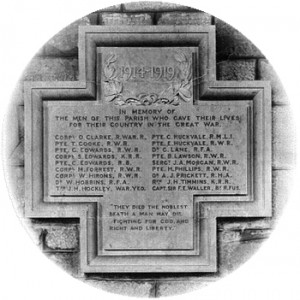 Situated on the south wall, to the right of the main door, this memorial is to the eighteen men from the community who died during WWI. It is made of Hopton Wood stone (by Mr F Holt of Warwick), in the form of a Greek cross and was unveiled and dedicated on Sunday, 29 August 1920.

The most prominent figure from the community named is “Capt Sir F E Waller, Bt R. Fus.” (of Woodcote) and the Rood Screen is also dedicated to his memory.  Leek Wootton History Group undertook a project to research all 18 men and they, along with those lost during World War II, are remembered at our annual Remembrance Day service as follows:

A copy of Leek Wootton History Group’s book, For God and Right and Liberty hangs nearby. Published in 2014 to commemorate the 100th anniversary of the start of WWI, it tells the stories of the men named on the memorial.

The Royal British Legion standard (laid up in 2008) is mounted above the WWI memorial.

View all posts by Jim